Timeform recap season 2019/20 - this week focused on the sprint division.

Our recap of the season - using Timeform ratings and Monte Carlo simulation to crown champions of each division not via peak performance but rather by taking into account a more complete array of ratings/performances - continues with the sprinters, the deepest division in Australia

To crown our Champion Sprinter we will create a sprint that towers over Everest. Our very own Olympus Mons. The eight highest rated sprinters from the 2019/20 season (all rated 123 or higher) taking each other on in 10,000 consecutive heats (with no track bias...) where there performance will be selected at random from an array of their five best ratings from the season that was.

The result is decisive. Nature Strip is without peer in the sprinting division. 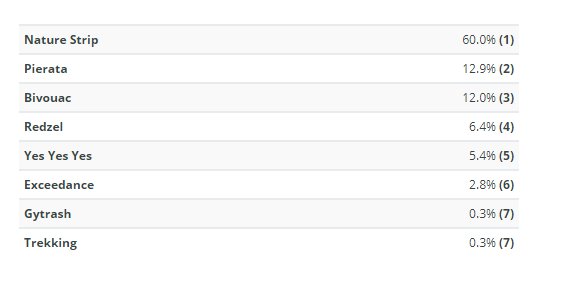 Nature Strip still had the occasional flop in 2019/20 but he holds the three highest ratings in the division. Meaning that in 3/5ths of the simulations the invisible hand reaches into the pot and pulls out an unbeatable marble.

The other two marbles can't win for him as the ever consistent Pierata has a full array of ratings that are better than Nature Strip's fourth and fifth best efforts. Pierata's may lack the peak power of Nature Strip but he at least makes it so that if Nature Strip misses Pierata hits.

Of course, even those hits are vulnerable to the peaks of others. Bivouac has a good blend of peaks and consistency and that wins him plenty of the races where Nature Strip flops and leaves the dregs for the rest. Trekking and Gytrash are reliable but vulnerable to higher ratings. Exceedance and Yes Yes Yes are the opposite. They've got nice peaks but they only get pulled from the pot occasionally and even then they can only win when the top dogs throw up a down run.

Being Champion Sprinter in Australia counts for plenty. It's undoubtedly the strength down under, and the fact that the two real Group One middle-distance races in Australian (the Cox Plate and the Queen Elizabeth) both went the way of internationally-trained horses goes a fair way to slamming that point home.

So when it comes to pulling together all of our champions - (You can catch up on the three-year-olds here, the two-year-olds here and the milers here - we are left with a lack of local candidates to fill the middle-distance slot.

Addeybb won the Ranvet and the Queen Elizabeth from Verry Elleegant who was well below her form in Lys Gracieux's Cox Plate (can any of these horses have harder names to type/spell??) but did win a Craven Plate and Tancred Stakes away from the Grand Finals and is easily the most credible local candidate for middle distance champion for our final race - the race to be Horse Of The Year.

Here we see the same trend. When Nature Strip is 'on' the rest are left to sit back and applaud their Champion before fighting over the scraps that bob up when he fails to fire.

Nature Strip is the Horse Of The Year in a result that fits the intuitive eye nicely. He trumps Bivouac, the Champion Three-Year-Old, and the two best over further, Te Akau Shark and Verry Elleegant - both graduates from across the Tasman.

Perhaps the best news of all is that all five are set to go around again in 2020/21.