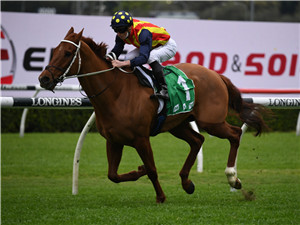 Daughter of Zed claims a thrilling renewal of the George Main

Nine of the best for Verry Elleegant

Nash Rawiller is continuing to build his early-season momentum.

Verry Elleegant has had to dig deep to claim the ninth Group 1 win of her career.

Auckland's extended lockdown is wearing thin with trainer Nick Bishara but the anticipation of another big weekend of racing is giving him some respite.

The elite mare is heavily backed in the 2021 George Main Stakes at Randwick on Saturday.

Sticking with the champ in the Tips and Race Preview for the 2021 George Main Stakes at Randwick on Saturday.

Top mare Verry Elleegant will again be one of the headline acts at Randwick.

Jockey Nash Rawiller has endorsed the ‘fresh’ approach to Eduardo’s TAB Everest campaign as he prepares to reunite with the sprinter at Randwick on Saturday.

O'Shea keen to get Everest campaign up and running

Of all the confirmed TAB Everest runners so far it’s the emerging Lost And Running that may have a point to prove at Randwick on Saturday but trainer John O’Shea says he doesn’t need to win to show he’s on target.