The Railway Stakes is a Group 1 race run under Handicap conditions for the milers at Ascot conducted by Perth Racing.
The Railway Stakes is run over 1600m. It was first run in 1887 and was won by Nimrod.
The race was originally run on Perth Cup day as a support race.
Early editions of the Railway Stakes were over 2000m but gradually reduced to 1500m until back up to a mile from 1984 onwards.
The Railway Stakes was a Principal Race then became a Group 1 from 1979.
Light weights do have a top record in the Railway. The 56.5kg (Sniper's Bullet) was the biggest weight carried since the metric system came in before Luckygray (58kg) scored in remarkable circumstances in 2013.
Gathering, Good Project, Scales Of Justice and Great Shot led all the way in recent years.
Four year olds have won 25 of the last 62 Railways.
Some Cox Plate winners have won the Railway before taking the Moonee Valley race. Both Northerly and Better Loosen Up kept improving enough to win the Plate the next year.
2003 running was at Belmont racecourse.
Those to do the Railway Stakes/Kingston Town Classic double are Better Loosen Up, Old Comrade, Modem and Sniper's Bullet.
Regal Power won in 2019 and ended the campaign winning the Ted Van Heemst Stakes. He ventured to Melbourne in the Autumn and won the second running of the All-Star Mile at Caulfield.
Inspirational Girl made it three wins on the trot for jockey William Pike, trainers Grant &amp; Alana Williams and owner Bob Peters following Regal Power and Galaxy Star.
The Railway Stakes was worth $1,000,000 in 2020.
Notable winners of the Railway Stakes include Inspirational Girl (2020), Regal Power (2019), Luckygray (2011/2013), Sniper's Bullet (2009), Modem (2004), Old Comrade (2001), Northerly (2000), Better Loosen Up (1989), Marwong (1988), Jungle Dawn (1987), Iko (1981), Asian Beau (1979), Detonator (1975), Starglow (1973), Millefleurs (1972), La Trice (1968), Big Bob (1961), Aquanita (1959), Beaufine (1943) and Lilyveil (1914).
The 2020 Railway Stakes was won by Inspirational Girl from Too Close The Sun and Uni Time. 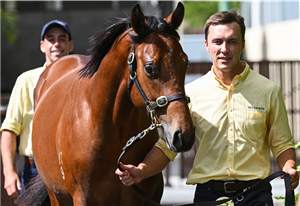 Who Are The Best In The West?

Rich Hill Stud’s John Thompson is confident the first yearlings by the farm’s shuttle stallion Satono Aladdin will be well received as they get set to go under the hammer at what will be a unique Karaka 2021.

Rawiller To Stay in WA

25-time Group 1-winning jockey Brad Rawiller has given his strongest indication yet that his move to Western Australia will be a permanent one.

New Zealand kicks off the New Year with a G1 being the Railway Stakes run at Ellerslie on Friday.

A top mare added to the Race History of the La Trice Classic run at Ascot on Saturday.

Progressive mare Vamos Bebe took the step up to stakes company with relative ease when she strode clear in the final stages of Saturday’s Listed Hallmark Stud Sprint (1200m) at Ellerslie for a comprehensive victory.

No Melbourne for Inspirational Girl

Russian Camelot has become the latest Group 1 hero to target The All-Star Mile 2021 after Melbourne Cup-winning trainer Danny O’Brien officially nominated his rising star for the third edition of Australia’s only fan-voted race.

I Am Invincible hits a century of winners

Truly Great comes out on top in Kingston Town Classic

Truly Great proved Owner Bob Peters and Jockey Chris Parnham are true masters when it comes to Group One wins with today’s victory in the $1M PeopleStart-Kingston Town Classic.

Harrison Confident Plan Will Come Off In Kingston Town

Trainer David Harrison hopes a change of plans will pay off in rich style and be handsomely rewarded for Gemma’s Son at Ascot on Saturday.