The Vinery Stud Stakes is a Group 1 race for three year old fillies conducted by the Australian Turf Club at Rosehill Gardens.
The Vinery Stud Stakes was first run in 1979 and was won by Impede.
The Vinery Stud Stakes is run over 2000m under Set Weights conditions. It was a G2 race until 1992.
The race is registered as the Storm Queen Stakes but has had numerous sponsors through the years.
Bart Cummings is the most successful trainer with four while Mick Dittman has three wins to his name as leading jockey.
Historically the most prevalent form leading into the Vinery Stud Stakes has been via the Coolmore Classic or the Keith Nolan (Kembla Grange) Classic.
VRC Oaks form has been sensational over the years. From 1989 onwards Research, Slight Chance, Northwood Plume, Saleous, Special Harmony, Hollow Bullet, Serenade Rose, Miss Finland, Faint Perfume, Mosheen all won both races.
Mirjulisa Lass and Montoya's Secret are the only horses in recent years to win this race after starting in a non-black type race the outing prior.
The Storm Queen/ATC Oaks double has only been done seven times – Sheraco (1982), Research (1989), Alcove (1994), Danendri (1997), Serenade Rose (2006), Heavenly Glow (2008) and Verry Elleegant (2019).
The quinella from 2018 would repeat in the Oaks but the other way around as Hiyaam could not hold off Unforgotten over the longer trip.
Miss Finland won the Golden Slipper and the Storm Queen in consecutive years becoming the only horse to achieve that.
Shout The Bar won at her fourth start giving Gai Waterhouse and Adrian Bott their third week in a row of G1 success in 2020. She also provided Adam Hyeronimus with his first G1 win.
In 1989 Research won this race and then would take out the Derby and the Oaks all within the space of 11 days.
The Vinery Stud Stakes was worth $500,000 in 2021.
Notable winners of the Vinery Stud Stakes include English Wonder (1983), Centaurea (1985), Research (1989), Slight Chance (1993), Saleous (1996), Champagne (1998), Special Harmony (2004), Serenade Rose (2006), Miss Finland (2007), Mosheen (2012), Lucia Valentina (2014), Single Gaze (2016), Verry Elleegant (2019) and Hungry Heart (2021).
The 2021 Vinery Stud Stakes was won by Hungry Heart from Harmony Rose and Impecunious. 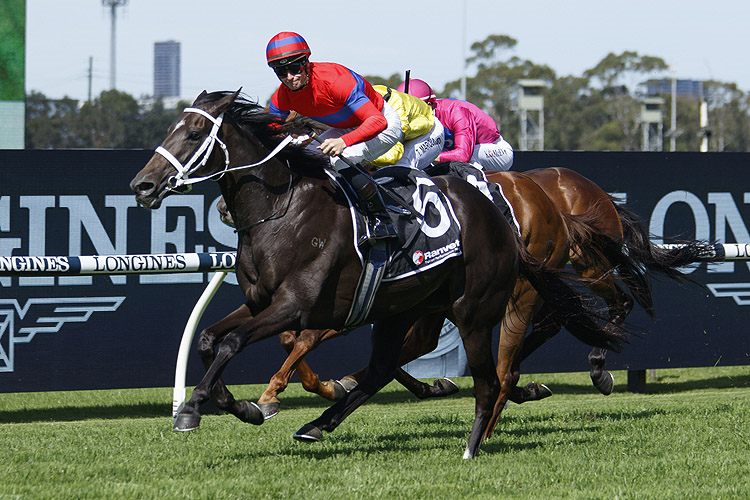 The onus is on Addeybb, as far as champion trainer Chris Waller is concerned, to improve to beat Verry Elleegant in their highly anticipated showdown in Saturday’s Group 1 $4m Longines Queen Elizabeth Stakes (2000m) at Royal Randwick.

News In Brief of French Racing and Trotting - 7th April 2021.

Lance O’Sullivan admits his confidence in Rocket Spade’s prospects for Australia’s richest staying classic hasn’t been bolstered by the subsequent Australian performances of the pair that trailed him home in the Gr.1 New Zealand Derby (2400m).

So You Think, Vancouver and Pride Of Dubai sire new stakes winners

What You Missed - Tancred Stakes Day

Hungry Heart has come with a sweeping run to claim her first G1 win in the Vinery Stud Stakes.

Trainer and jockey quotes after the Group 1 Vinery Stud Stakes at Rosehill on Saturday taken out by Hungry Heart.

Hungry Heart steps up to 2000 metres

The Oaks winner is fancied in the 2021 Vinery Stud Stakes at Rosehill on Saturday.

Hungry Heart will be striving to follow in the footsteps of star stablemate Verry Elleegant by winning the Vinery Stud Stakes.