The Matron Stakes is a Group 1 race run under Weight For Age conditions for fillies and mares at Leopardstown conducted by the Leopardstown Racecourse for Horse Racing Ireland.
The Matron Stakes is run over a mile. It was first run in 1980 and was won by Calandra.
It is one of two races in Ireland for fillies and mares only. The other is the Pretty Polly Stakes.
The race forms part of Irish Champions weekend.
Originally a Group 3 it was elevated to Group 2 in 2003 and Group 1 in 2004.
The race was known as the Gilltown Stud Stakes when at the Curragh but became the Matron in the 80s.
In the last decade, six fillies have saluted with them taking the last five.
Johnny Murtagh and Wayne Lordan have ridden the winner on three occasions while John Dunlop has tasted most success as trainer with four winners.
Murtagh would go on to train the winner in 2020 via Champers Elysees.
The Matron Stakes was worth €250,000 in 2020.
Notable winners of the Matron Stakes include Iridessa (2019), Laurens (2018), Hydrangea (2017), Legatissimo (2015), Lillie Langtry (2010), Rainbow View (2009), Lush Lashes (2008), Attraction (2005), Soviet Song (2004), Favourable Terms (2003), Timarida (1995) and Kooyonga (1991).
The 2020 Matron Stakes was won by Champers Elysees from Peaceful and Fancy Blue. 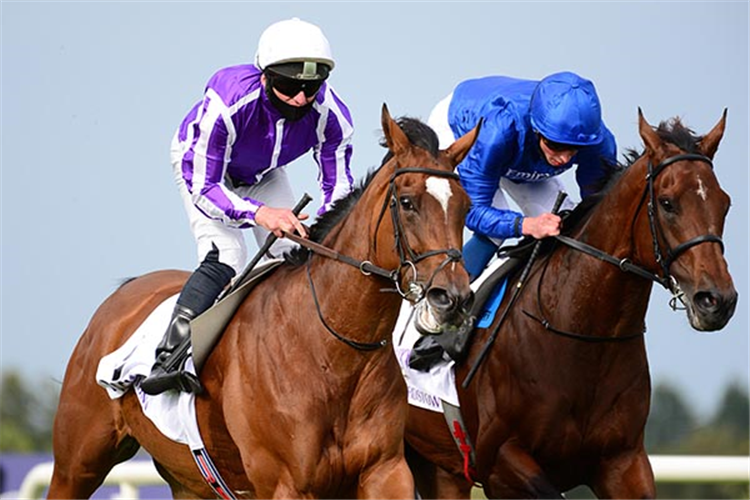 Updated 8 days ago
Irish Champion Stakes: get the takeaway as Magical thwarts Ghaiyyath in an epic
Murtagh celebrates Group One glory with Champers Elysees

Matron success is first at the top level as a trainer for multiple Classic-winning rider.

Breeders’ Cup could be on the agenda for Harrington winner.

The last race on the Leopardstown Cardn is called "Is It 2021 Yet?" which we think is brilliant.

The Racing and Sports Pricing Model looks over the 2020 Irish Champion Stakes from Leopardstown.

Will it be the fillies or the mares in the Matron Stakes run at Leopardstown on Saturday.

Champions Weekend winner would mean everything to Murtagh

‘It’s the biggest two days in Irish racing and we need to be part of it’.

Books 2, 3, and 4 for the October Yearling Sale released by Tattersalls