The Victoria Mile is a Grade 1 race run under Set Weight conditions for four year olds and above mares at Tokyo racecourse conducted by the Japan Racing Association.
The Victoria Mile is run over 1600m. It was first run in 2006 and was won by Dance In The Mood.
This is the mares chance in Japan to get a G1.
The Victoria Mile was worth JPY204,960,000 in 2020.
Tokyo racecourse is a left handed course with the start at the top of the back straight.
The majority of wins since it began are with the four year olds.
Vodka won the Derby in 2007 and two years on she won some top races including this by seven lengths and also the Japan Cup.
Buena Vista rarely ran a bad race. She took out the Victoria Mile after dropping back in trip from the Sheema Classic in Dubai.
Almond Eye was kept in training as a 5yo and returned in the 2020 edition. She absolutely bolted in four lengths.
The most successful recent jockeys are Christophe Lemaire, Norihiro Yokoyama, Hiroyuki Uchida and Keita Tosaki with two wins.
Damian Lane won his first Japanese G1 on a riding stint on Normcore in 2019.
Hideaki Fujiwara has three wins as a trainer.
Notable winners of the Victoria Mile include Almond Eye (2020), Straight Girl (2015/2016), Verxina (2013/2014), Apapane (2011), Buena Vista (2010), Vodka (2009) and Dance In The Mood (2006).
The 2020 Victoria Mile was won by Almond Eye from Sound Chiara and Normcore. 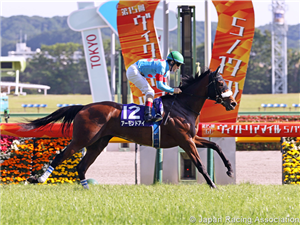 This G2 on Saturday is over 1400m is actually quite open.

The 15th running of the Victoria Mile will be held on Sunday, May 17th and it is a 1,600 meter turf event at Tokyo Racecourse.

The 25th running of the NHK Mile Cup will be held on Sunday, May 10th and it is a 1,600 meter turf event at Tokyo Racecourse.