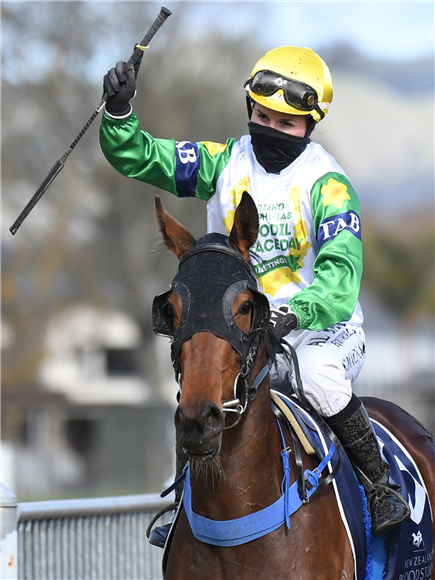 Thirteen may be an unlucky number for some, but for jockey Jonathan Riddell it marks another milestone in an amazing career in the saddle that began back in the 1995/96 season when he took his first steps as a fledgling jumps jockey.

Rider Sarah Macnab produced a gem of a ride as she guided under-rated filly Bellacontte to a thrilling victory in the Gr.3 Hawke’s Bay Breeders’ Gold Trail Stakes (1200m) at Hastings.

A week ago, the chances of talented four-year-old Frontman contesting the Gr.1 Tarzino Trophy (1400m) at Hastings looked slim, but a host of contributing factors have resulted in a change of heart.

Auckland's extended lockdown is wearing thin with trainer Nick Bishara but the anticipation of another big weekend of racing is giving him some respite.

Nine-time Group One winner Avantage has been retired from racing after suffering a tendon injury.

Shafiq all pumped up with Sacred Croix

Shafiq Rizuan famously won a Group 1 race as an apprentice jockey in Singapore, threw in two more to his resume at a short stint in New Zealand, but would now like to achieve that feat as a professional jockey back at his original Kranji home ground this Saturday.

Rain the only drawback for heavily armed Richards

This weekend will prove to be one of trainer Jamie Richards’ busiest to date, with 34 horses accepted at Taupo on Friday, Riccarton and Hastings on Saturday, and Te Aroha on Sunday, plus a trio of stars — Probabeel, Kahma Lass and Amarelinha — in Australia.

The chances of high-class galloper Mascarpone venturing across the Tasman this spring are looking highly unlikely, however, Group One performed stablemate Beauden remains an outside hope of making it to Melbourne, where he holds a nomination for the Gr.1 Melbourne Cup (3200m) with an allotted weight of 53.5kg.

Spring Tide’s quick rise through the ranks in winter has persuaded Foxton trainer Chrissy Bambry to take an unscheduled crack at Group One company this weekend.

First of the WFA features in New Zealand for the Spring is the Hawke’s Bay Challenge Stakes (Tarzino Trophy) run at Hastings on Saturday.

Trainer Murray Baker got to celebrate a special personal milestone with a victory at Te Rapa on Saturday when lightly raced four-year-old Frontman made a winning start to an ambitious spring campaign.

Tavis Court back to winning form at New Plymouth

Dependable sprinter Tavis Court did what he does best at New Plymouth on Saturday when he ground out another victory for trainer Anna Clement.

The John Bary-trained Callsign Mav tuned up for his fresh-up tilt at the Gr.1 Tarzino Trophy (1400m) with a dominant trials victory at Taupo on Wednesday.