First for The Wow Signal

The Wow Signal’s daughter How Womantic landed first stakes winner as she showed her class in the Kevin Hayes Stakes at Caulfield.

The Wow Signal's (Starspangledbanner) daughter How Womantic (3 f ex Banderilla by Delzao) landed the late stallion with his first stakes winner as she showed her class in the Kevin Hayes Stakes (Gr 3, 1200m) at Caulfield on Saturday - taking her unbeaten record to four.

The Ciaron Maher and David Eustace-trained three-year-old filly sliced through the field surging to line to beat Enfleurage (Exceed And Excel) by a long-neck.

Such was the impressive manner of the victory, the stable are now considering targeting the filly at the Surround Stakes (Gr 1, 1400m) at Randwick on February 29.

"I really like her," said winning jockey Jye McNeil. "She's a perfect filly. A lovely filly.

"It was a tough win. I think she's a horse that's going to be a really good chaser and just with the way they ran the first (race) and with our good draw today we just wanted to utilise that and try and dictate and she rewarded us.

"I got there (to the front) at the top of the straight and was just hoping she would stick it out, but the challengers came and she really fought them off."

"She'd have no problems with 1400 (metres)," he said. "She switches off lovely and she maintains a good gallop." The ill-fated The Wow Signal covered 43 mares at Swettenham Stud resulting in only 12 foals a crop that has yielded three individual winners, including this filly.

Purchased by Spicer Thoroughbreds for $50,000 from the Sun Stud draft at the 2018 Inglis Premier Yearling Sale, How Womantic has now won all four of her career starts which has seen her accumulate $316,550 in prize-money.

The filly is out of four-time winning mare Banderilla (Delzao) who also produced Kitmeister (Myboycharlie) - a winner over 1200 metres in the Philippines. Banderilla herself is a half-sister to four winners, while further back this is family of Our Chamozzle (Chamozzle).

The Wow Signal, who struggled with fertility throughout his short career at stud, is the sire of five winners in total - with the stallion also represented with winners one winner apiece in Britain and France.

The Group 1-winning stallion died in 2018 after suffering from laminitis. 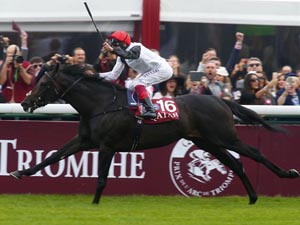