Kosciuszko hero back in the winner’s stall

Kathy O’Hara’s decision to ride Art Cadeau patiently has proven to be a winning move.

Bad luck and wet tracks have thwarted Art Cadeau's campaign, but the Kosciusko winner has bounced back to his best with a dashing display at Randwick.

Trainer Terry Robinson said he almost pulled the pin on the horse's preparation after he endured a tough experience when fifth in the Hawkesbury Cup and then struck an unsuitable heavy track when unplaced in the Scone Cup.

But Art Cadeau's owners convinced him to persevere, and Robinson was glad they did after the gelding steamed down the outside to land Saturday's Fujitsu General Handicap (1400m) by two lengths over True Detective.

"It's good to see him back. He's got a fantastic record here," Robinson said.

"He didn't have much luck at Hawkesbury, he was caught three-deep and he got galloped on as well so he pulled up sore after that run.

"He recovered quickly and unfortunately, we ended up at Scone and it rained on the day.

"I probably wouldn't have run him only we'd travelled that far. He wasn't all that comfortable on the track."

With regular rider Tommy Berry in Brisbane, Kathy O'Hara reacquainted herself with Art Cadeau after guiding him to a Group Three placing first-up in March.

She said Robinson didn't tie her down with riding instructions and she was happy she pulled the right rein by going back as the race was run at a strong tempo.

"The speed was quite quick so it was a good job we didn't go forward or we might have got posted," O'Hara said.

"I'm just pleased for Terry and the owners that he has come back to win today."

Robinson said he would continue with Art Cadeau's campaign now the horse had returned to form.

Art Cadeau wins well sailing down the outside in the 8th event at Randwick thanks to a gun steer from @Kathy_ohara! pic.twitter.com/o8dfHf9ktv 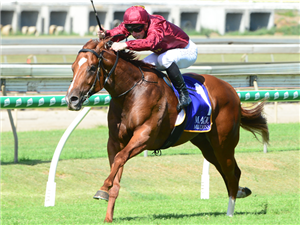