Waller Confident Nature Will Take Its Course In TJ Defence

Nature Strip hasn’t quite been able to scale the Everest yet but trainer Chris Waller says he couldn’t have his star sprinter in better shape, physically or mentally, ahead of his TJ Smith Stakes defence at Randwick on Saturday.

Chris Waller has seen plenty of change in the six-year-old since he took over his training just over two years ago and has him is in a place where he doesn't need to overcomplicate things to get a result.

That's why Waller resisted the temptation to run with top weight of 59.5kg in the Galaxy last month and put his sole focus on the Group 1 $2.5m Heineken TJ Smith Stakes (1200m) and exacting revenge on the flying Eduardo from their Challenge Stakes clash.

Eduardo of course went on to win the Galaxy in Nature Strip's absence.

"It's going to be a great race simple as that,'' Waller said.

"Eduardo is going terrific, they have got him to a new level I feel and he is certainly the benchmark.

"It was a big weight (in the Galaxy) and on wet tracks they do take their toll and we didn't want to flatten him going into a TJ. Hopefully 1200m will suit Nature Strip a bit more."

And if the TJ is seen as a rematch then it'll be the first of two two-horse wars Waller is involved in at The Star Championships – he has superstar mare Verry Elleegant in what promises to be the race of the carnival against Addeybb in Saturday week's $4m Longines Queen Elizabeth Stakes.

Nature Strip, $3.50 favourite with TAB on Thursday after drawing gate five, is one of two Waller reps in the TJ with Group 1 winning filly September Run ($10) given her chance in the autumn's premier sprint.

When Waller acquired Nature Strip he had a reputation as a rising star and while it's fair to say he's more than lived up to that expectation he hasn't been without his quirks.

It took the champion trainer quite a while to get a handle on the gelding through 2019, as he produced some hot and cold performances, but aside from a forgettable TAB Everest campaign last spring he's a lot more predictable.

"And he's a lovely horse to work with too, he's nature's gentleman around the stable. It's just race day he's pretty attuned to what goes on.

"But that has changed as well, we saw him relax well first-up in the Lightning and even last start.

"He has that extra gear now, before it was just flat out now he has a second gear as well. High cruising speed, 1200m type races are perfect for him."

The only horse to defend a TJ Smith crown is Chautauqua, who famously won three straight from 2015, while the unbeaten champion Black Caviar won the race in 2011 and 2013 - the latter her farewell race.

Instead of tackling the Galaxy, two days later Nature Strip had a spin around Rosehill narrowly winning a trial and performing to Waller's liking.

"Nature Strip is well, we gave him a trial last Monday to keep him ticking over and he runs well fresh,'' he said.

She was a brilliant winner of the Group 1 Coolmore Stud Stakes in the spring and chased Nature Strip home in the Black Caviar Lightning. She was a beaten favourite in the Newmarket Handicap before having little luck when fourth in the William Reid Stakes.

It'll be September Run's first start in Sydney since last August and on what she's shown this autumn Waller is confident she can be effective against the older horses.

"She had no luck at Moonee Valley and still charged to the line,'' he said.

"Her sectional times were good and she has settled back into Rosehill without any problems. The William Reid run was terrific and she'll keep them honest."

Haut Brion Her, who resumed with a battling fifth in the Galaxy, was due to take her place in the TJ Smith but she was scratched by Waller on Thursday afternoon. 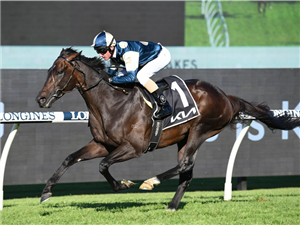