Trainer Tony Gollan believes a genuine Group horse will win the $2 million Magic Millions 3YO Guineas and is confident star three-year-old Isotope can deliver at the Gold Coast on Saturday.

Gollan has had success on Magic Millions day in past years but has never tasted victory in either of the two main features, the Magic Millions 2YO Classic and 3YO Guineas.

"It's a very hard race with a lot of quality horses and it'll take a genuine Group horse to win it and I'm hopeful Isotope can do it," Gollan said.

His best Guineas result was with Outback Barbie who finished third to the Chris Munce-trained Boomsara in 2019.

I'm A Rippa and Outback Barbie also claimed the Magic Millions QTIS races in 2018 and 2020.

The seven-time Brisbane trainers' premiership winner won't have a runner in this year's 2YO Classic, but Isotope is a $2.50 favourite to give Gollan a breakthrough Guineas win.

He also has second emergency Starosa waiting in the wings for another scratching to gain a Guineas start after Team Edmonds withdrew Smart 'n' Sexy.

"I'm happy Isotope drew barrier seven and I'd like to see her race a bit closer than she did when she won the Gold Edition last time," Gollan said.

"She stepped away well that day but couldn't muster any speed but this time there's a lot of speed horses drawn under her."

Queensland trained horses haven't a great record in the Magic Millions Guineas in recent years and the race has become a graveyard for local sprinters.

Since 2001 when the race was first run, Queensland has won the 1400-metre feature only four times.

Chris Munce trained Boomsara to win in 2019, ending a six-year drought since the Jason McLachlan-trained Saluter was successful in 2013.

While Isotope is a dominant market leader, she will need to defy a poor record of favourites in the Magic Millions Guineas with only three successful since it was first run in 2001. 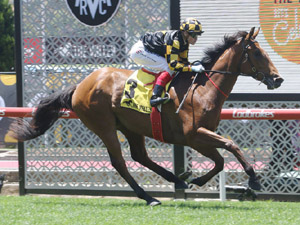