It's a massive day of racing in Australia with the Epsom meeting at Randwick and the Turnbull Stakes meeting at Flemington taking centre stage and meetings at Kalgoorlie, Morphettville and Eagle Farm to keep the party going.

Chris Waller chases his fourth Epsom Handicap success on Saturday having won three straight in 2015. He has run second the last two years running with Mackintosh also running third in 2016, no question it is a key target race for Sydney's biggest stable. Four-year-old Kolding heads his assault and appears very well placed off the back of his win in the Group 3 Bill Ritchie Handicap [1400m], the same path Boban took en-route to his victory in 2013. Read More

As a FREE Racing and Sports offer, click below for today's Eagle Farm Computer Card.

Turnbull Stakes Day often shapes the spring and Saturday's card has several races with the potential to do just that. Can Mystic Journey stamp herself as the Cox Plate filly so many want her to be? Can Surprise Baby stamp his ticket to the Melbourne Cup? Great questions, with interesting answers to bet on, but the question we are going to zone in on for the Melbourne Mail is - is Miami Bound at the top of the Oaks pecking order? We at Melbourne Mail HQ suspect the answer to that answer is yes. Read More

Last season's Queensland Oaks heroine Winning Ways looks set to strike third up at Eagle Farm on Saturday. Winning Ways put the writing on the wall last start when she jumped in distance for a closing fourth in an effort that suggested she will be well placed in the Lexus Spring Cup over 2225m. Read More

The break between Belmont and Ascot is filled with the running of the Kalgoorlie carnival and the Cup in particular on Saturday. It is a good edition of that Kalgoorlie Cup with plenty of chances and the fascination of Ihtsahymn back from Darwin. However we are going for one racing on the limit being Spiritual Warrior who has won three on the trot. Read More

There are nine races on the Adelaide program this week but not very large fields. That can make things tricky regarding price and speed in the races. A mare resumes in the last and she ended last campaign on a high. So We Are was taking on the good 3yos last campaign and did run very honestly. Read More 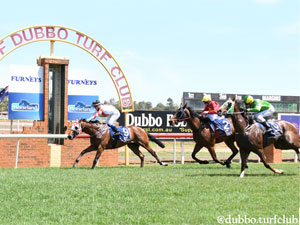